The experience of waiting is universal and in many senses a uniquely human one. When adventure is promised and withheld, what becomes of the would-be hero? When their only companion is endless time and one another, what becomes of the noble adventuring party or crew of scoundrels? In a world of heroic adversity, how does a hero deal with the absurdity of being stuck in a small and hostile space?

Enter the Finest: the worst establishment in the world. There will be no music, drinks or friendly strangers; there may be fights, but they will only make your stay here more miserable. Worst of all, there is no exit. This is limbo, and you're in it for the long haul. Perhaps you'll come out friends on the other side. Maybe you'll even learn something about yourself in the Finest's exquisite desolation.

In short, have you ever wanted to replicate the experience of No Exit or Waiting for Godot as a prelude to your adventure? Have you ever wanted to define the space before the adventure begins? Are you interested in taking perhaps the most humanizing act of characterization possible, having to wait with no other recourse? Maybe you think you'd enjoy a game about being strictly confined and essentially disempowered. All of these, it turns out, can be surprisingly fun.

THE FINEST (there will be no music).pdf 44 kB

The Finest is hard to describe.

Technically, it's a sort of waiting room for a few characters before a game begins, and you can use it as a sort of atmospheric prelude or interlude to a campaign. It takes place in an isolated area where other characters cannot reach, and significant dramatic actions in it fail.

It's also sort of a larp, in that any undertaking you want your characters to perform takes in real life the same amount of time it would take to perform in game.

It's also sort of a prison, in that the rules are pretty clear that it takes hold of you and does not end until it is over.

Apart from being a strong concept game, I can see probably two uses for it. One being a fairly intense, quiet prologue---which I think a lot of games would benefit from. The other would be to simply make the game a Delta Green monster, which I think it would work great as.

Either way, I do recommend picking up a copy and checking it out.

I played a 2-hour game of this over Discord voicechat today! It was a lot of fun, in no small part because my co-players made & inhabited absolutely top-notch characters.

The Finest (there will be no music) is an exercise that asks you to immerse yourself in character, embrace awkward silences, and get introduced to your fellow players' characters in a low-stakes way. It's a game that's built upon the (mmo or airport) waiting-room, the backstage, the liminal space - and uses time, silence, uncertainty, and idleness as materials. It's great, play it! 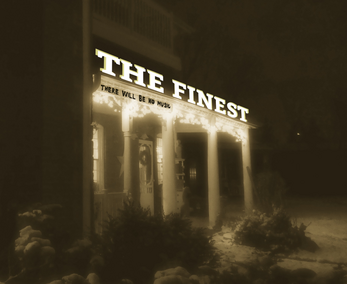